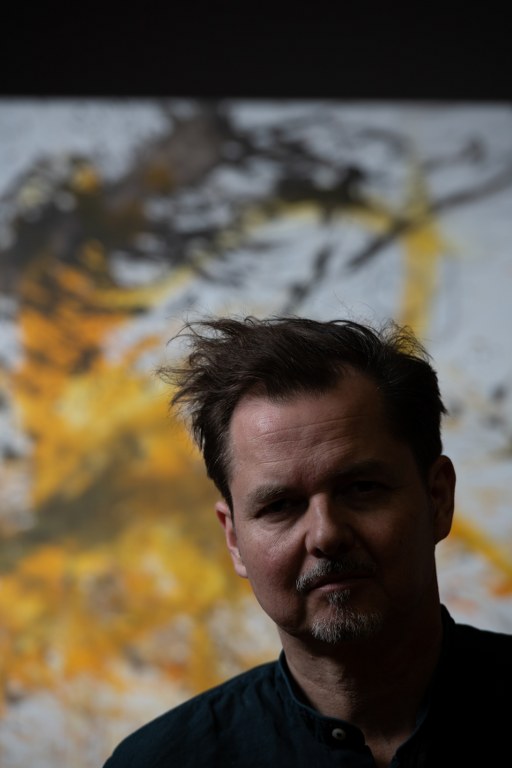 „Dynamism determines the artistic language of Heinz Aschenbrenner, whose brush almost flies along the canvas. This creates a fascination for the viewer as he can identify these imaginary „flying pictures“ for himself quite easily.

The main colours are black and white whereas one colour gives the other one enough space so thoughts can fly.

When he chooses to work with other colours it is usually earth tones and he especially likes the colour red as a contrast to the monochrome.

Aschenbrenner is a go getter, with strong almost monochrome brushstrokes he achieves effective three dimensionality. His picture language breaths aesthetics and recognises picturesque exertion. Aschenbrenner is able to draw the observer into the picture and make them part of the creative journey of his art.

I got to know Aschenbrenner as a young art collector with a tremendous capacity and enthusiasm for art. Later he took part in some of my painting courses at Bad Reichenhall and it transpired that has real talent.

I told him he should be painting himself rather than spending a lot of money buying paintings and he is almost doing this now.

He has got a sensitive feeling for the opportunities to develop the newest forms of art. I highly regard his work.

After years of intensive study of the “Wiener Aktionismus” especially with the artist Hermann Nitsch, I have now reached a form of expressionism which gets created out of movement, but is not uncontrolled. A picture which is developed in the mind is transformed into movements, the “controlled accident”, a picturesque paradox.

As happens often in life I got to know Aschenbrenner by accident.

I owed my neighbour, an architect, a favour and as I own an art gallery he suggested displaying two paintings of his brother in law at my next exhibition which featured various artists. The architect was convinced of the quality of the paintings.

After I saw several other pictures of Aschenbrenner there was no doubt in my mind – I wanted to do an exhibition with his pictures only!

The power, the movements of the brush strokes, the selection of colours all was of archaic power which deeply impressed me, and I was proven right as the exhibition was a huge success.

In the meantime he has become a regular artist in my gallery and I am pleased that he is branching out on an international level.

I wish him all the best of luck and success for „Art Beijing“which he truly deserves.